Almost a year ago I posted Men in mink about almuces. Since then I have been meaning to publish some further thoughts about the topic. Well, let's face it, it is the sort of thing that is never that far from my mind.

The almuces we were considering were those of secular canons - those of cathedrals and collegiate churches - rather than regular canons, such as the Premonstratenians, who as Br. Rupert O.Praem pointed out, have retained the use of white almuces.

Some medieval foundations specify in their foundation deeds or statutes the type of almuces to be worn by the canons. Some were of cloth rather than fur, as for example at the College of the Holy Trinity in my home town of Pontefract, which was founded in 1385. At Beverley Minster different groups within the community had different types of fur for their almuces so as to differentiate them.
The brass rubbings and incised slabs we were considering were from both England and the continent. English medieval almuces appear to have been more on the lines of a mozzetta, but unlike continental examples had two pendant lappets at the front - shown on many English brasses. The examples from the Empire and Poland appear to be longer, and did not have the lappets. Here is a photograpgh from Fribourg in Switzerland from c.1900: 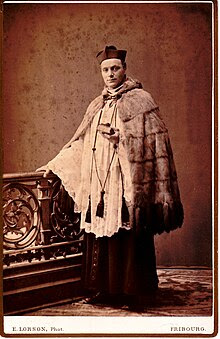 In appearance it is virtually identical to one shown on a brass from Posznan of c.1390.

In France and Scotland the almuce appears to have been worn drawn up over the head of the wearer - wearing it like that in choir on a cold morning must have been rather like wrapping oneself in a duvet to keep warm.

English, German and Polish examples on monuments and in illuminations show it being worn as a close fitting shoulder cape. Here is a mid-fifteenth century English depiction of the almuce worn by an Augustinian canon under a cope:

Here is another image of a secular priest from the same period who is also depiced in an almuce:

Robert Semer, Vicar of St Martin-le-Grand York, c.1442.
The cappa nigra is shown as blue rather than black for the sake of allowing light through. Also noteworthy is his "Old English surplice" with its scallopped edges.

From the St Martin window, given by Semer, and still in the church

By the later fifteenth century the almuce is sometimes shown being carried over the left forearm, as it still is by the Premonstratensians. Thus the figure of Provost Edward Bonkil on the Trinity panels from his collegiate church in Edinburgh from the years 1473-1482, and dated more closely to 1478-9, shows him carrying his almuce over his arm.

Photograph from the National Gallery of Scotland.
Provost Bonkil is in the second panel ftom the left

I found I had copied a posting from the New Liturgical Movement by Gregor Killmorgan from January 14th 2010 about almuces, and I am adding that to this post: 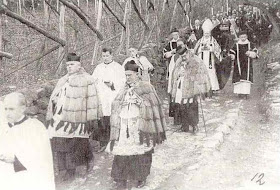 Yesterday I mentioned that the books of the great Joseph Braun SJ are available online. To give those of you unfamiliar with his work an idea, and since I recently came by some very good - and rare - pictures of the almuce being worn on my friend Leo's The Far Sight 2.0, which I use to illustrate this piece, I have translated the respective section from Braun's Handbuch der Paramentik [Manual of Paramentics], p. 204 f. The photographs of tomb slabs of the 16th century were taken by me in Halberstadt Cathedral. 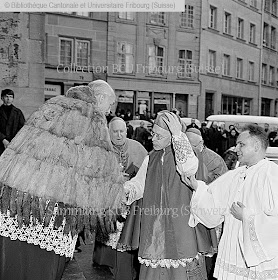 The almuce (almucia, armutia) is not very commonly used today anymore. A part of choir dress, it identifies the wearer as a canon or prebendary. It is made of fur and is in principle a shoulder cape, but is only sporadically used as such any longer. Mostly it is today merely an insignia which either rests on the left arm or is placed on the desk of the choir stall.

The first news of the almuce we receive from the 12th Century. It was originally a headdress: it either had the shape of a cap reaching somewhat beyond the ears , or that of a hood extending below far down the back. Both types are mentioned and described in the statutes of Bayeux (ca. 1270). The hoodlike almuce was here a privilege of the canons of the upper row of choir stalls. It was made, whether cap or hood, sometimes of woolen stuff or silk, sometimes, and this was most common, of fur or lambskin; but in the latter case it was lined with stuff. Also, if made of fur or skin, it was popular to trim it with tassels at the hem, which were made from the tails of weasels and similar animals. The sculptures show plenty of evidence for this, especially in the later period. 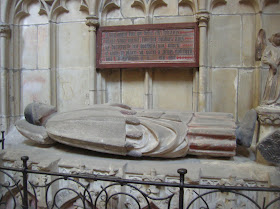 Towards the end of the Middle Ages the almuce underwent, in terms of shape and character, a very significant change. The pictorial representations, but especially the numerous tomb figures of canonici from this period are very instructive in this regard [NLM note: see photographs of tomb slabs at Halberstadt Cathedral to the left]. 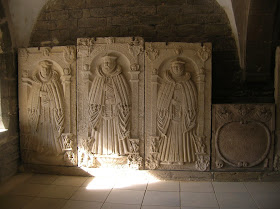 The Almucia now takes the form of a collar, of a real shoulder cloak, which is either slit at the front, or completely closed in the manner of a bell-shaped [NLM note: the term used in German for conical chasubles] chasuble, and it often not merely covered the upper body, but even reached down beyond the waist. A hood was indeed still attached to it, but more as a decoration and as a reminder of the erstwhile purpose and character of the garment than for the sake of use as head covering. In this new form the almuce appears uncommonly becoming.

If the collar remained open in the front of, it ended in some places from the chest on in two long, wide, stole-like strips, which extended almost to the knees. The transformation of the almuce was no doubt occasioned by the circumstance that during choral Office, more and more the more convenient biretta came into use as head covering, and consequently, the almuce lost its practical significance.

The almuce was not originally an insignia of collegiate and cathedral canons. It was even worn by laypeople, and not merely by men, but also by women. In the late Middle Ages it must, however, have already possessed the character of an insignia, as can be inferred from the circumstance that it now regularly recurs in the tomb figures of canons, if the deceased is not shown in Mass vestments. With express words it is called by the Provincial Synod of Milan of the year 1579 an insigne Canonicorum. The odd-sounding name almuce has as yet not found a completely satisfactory explanation. 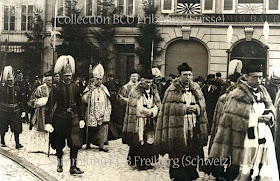 An almuce of the closed variety is also worn by the canons of the Collegiate Chapter of Saints John Baptist and John Evangelist at Regenburg, Germany, of which Mgr. Georg Ratzinger, the brother of Pope Benedict XVI, is a member: 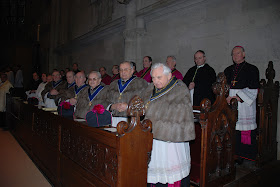