Today is the 710th anniversary of the issue in 1302 by Pope Boniface VIII of his bull Unam Sanctam. 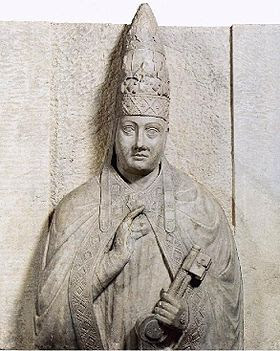 Pope Boniface VIII
Image: fr.wikipedia.org
The bull, withits resounding concluding sentence "Furthermore, we declare, we proclaim, we define that it is absolutely necessary for salvation that every human creature be subject to the Roman Pontiff ", is often regarded as the ultimate official expression of Papal claims to hegemony over both ecclesiastical and secular matters.
The bull was seen to be directed in particular against King Philip IV of France, with whom the Pope had been in dispute over their calims and ambitions to control the Church in France.

King Philip IV
The tomb effigy at St Denis
Image:paradoxplace.com
The text of Unam sanctam can be read in translation here.

There is an online article about the bull and the events that led the Pope to issue it which can be read here. An online biography of Pope Boniface VIII can be here and one of King Philip IV here.

However Unam Sanctam is not just something for historians of the Papacy and the Middle Age. It remains part of the living tradition of Papal claims to exercise its plenitudo potestatis and to its exercise of the Petrine ministry.
Thus Pope Pius XII in Mystici Corpus Christi ( June 29 1943) wrote: " That Christ and His Vicar constitute one only Head is the solemn teaching of Our predecessor of immortal memory Boniface VIII in the Apostolic Letter Unam Sanctam."

What an interesting blog, introduced by a thought-provoking photo. The unusual wall painting of the dwellings is also a strangely modern interpretation. Something like this hieroglyphic view of a park by Swiss painter Paul Klee, http://EN.WahooArt.com/A55A04/w.nsf/OPRA/BRUE-8LT475.
The image can be seen at wahooart.com who can supply you with a canvas print of it.