Kingdom of the Two Sicilies - amending the Castro succession

The Kingdom of the Two Sicilies


I was sent the following link by a friend about the announcement by HRH the Duke of Castro that he has amended the law of succession to his claim to the throne of the Kingdom of the Two Sicilies to a system of absolute primogeniture, thus putting his two daughters in immediate succession to himself. The post can be seen at  http://royalmusingsblogspotcom.blogspot.co.uk/2016/05/duke-of-castro-adopts-gender-equal.html

As the writer points out this may well call into question the apparent moves to reconciliation two to three years ago with the other claimant branch of the Bourbon house of Two Sicilies represented by HRH the Duke of Calabria. The link to that story can be accessed at  http://royalmusingsblogspotcom.blogspot.co.uk/2014/01/royal-musing-exclusive-reconciliation.html


Looking for illustrations to add to this post I was surprised by the number of T-shirts, mugs, key-rings and suchlike that one can buy on-line with the arms of Il Regno that one can purchase online. Do Cafepress know something we don't? It it a hopeful sign for the future of the cause of the Two Sicilies?

I remeber being told by friends who had been on a motoring holiday that on a mountain road in, I think, the Abruzzi, they passed a very modern road sign proclaiming that drivers had now entered the Kingdom of the Two Sicilies.

Talking to other freinds who are from the south of Italy and indeed from the Two Sicilies, they still resent the denigration of what was in many ways a progressive realm by Italian standards in the mid-nineteenth century and the wholseale asset stripping of economic resources that followed upon unification wiith Piedmont-Sardinia. That led to the poverty of the south. Only now are people outside Italy becoming aware of how the south was an occupied zone, with Piedmontese troops in plenty for many years after 1861. 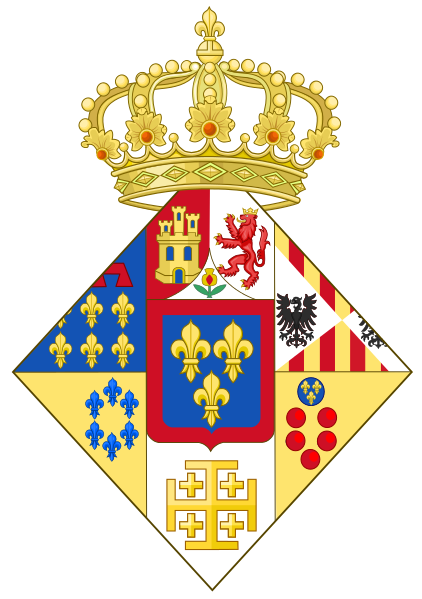 Arms of a Princess of the Two Sicilies