Today is the feast of St Catherine of Siena and John Dillon posted the following images of her on the Medieval Religion discussion group:

The mystic and visionary Catherine of Siena was born in 1347, the umpteenth daughter of a Sienese wool-dyer and his wife.  A professed virgin since childhood, she became a Dominican tertiary at the age of eighteen, living very ascetically and engaging in acts of charity to the sick and the poor.  In 1370 she received a series of visions that impelled her to enter public life.  Catherine then carried on a lengthy correspondence with Pope Gregory XI, touching on many matters and urging church reform.  In 1375 Catherine received the Holy Stigmata.  In 1376 she was in Avignon and from 1378 until her death in 1380 she lived at Rome.

Catherine was buried in her order's Roman church of Santa Maria sopra Minerva.  The subject of an immediately posthumous cult, she has a very impressive Vita (BHL 1702) by her confessor, Bl. Raymond of Capua, who as prior of the Dominican convent erected her first funerary monument in 1380.  The monument was modified in 1430; in 1466 Catherine was translated to her present resting place before the high altar.  Herewith some views of Catherine's tomb in Santa Maria sopra Minerva, with its sculpture of her from 1430 reposing on a sarcophagus added in 1461, the year of her canonization by her fellow Sienese, Pius II:
http://www.flickr.com/photos/rayflynn/2034595233/
http://tinyurl.com/26azt4r
http://tinyurl.com/2c5jcpl 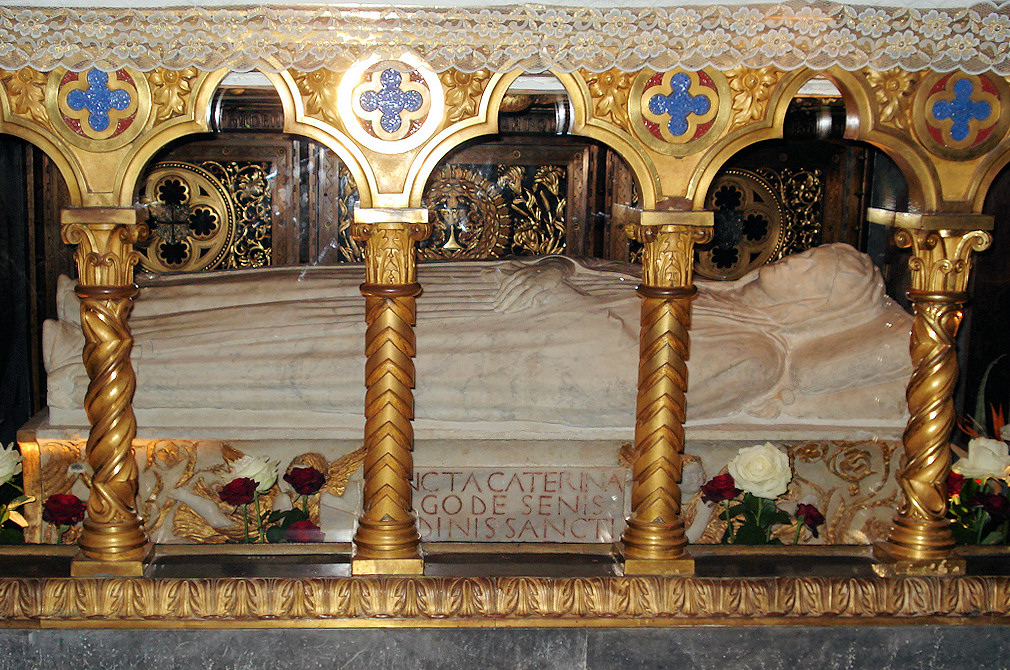 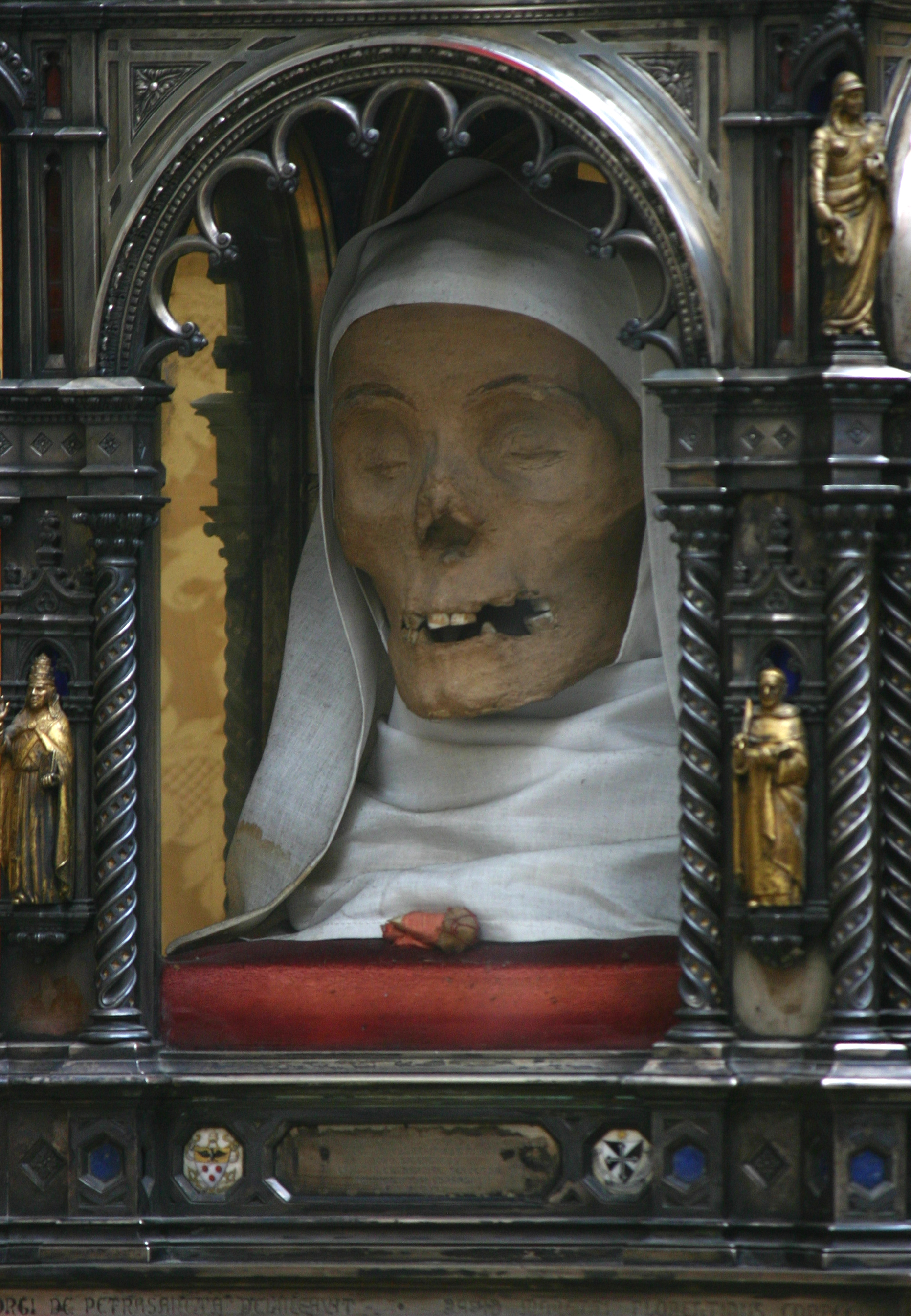 http://tinyurl.com/zzabyy2
It also possesses one of her fingers: 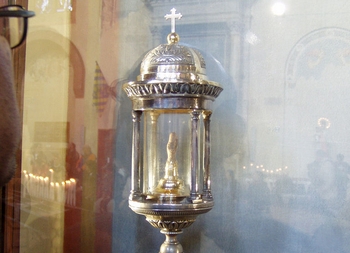 Catherine was named a Doctor of the Church in 1970.  Along with Francis of Assisi, she is a primary patron of Italy.  In 1999 she was proclaimed a patron saint of Europe.


Some period-pertinent images of St. Catherine of Siena: 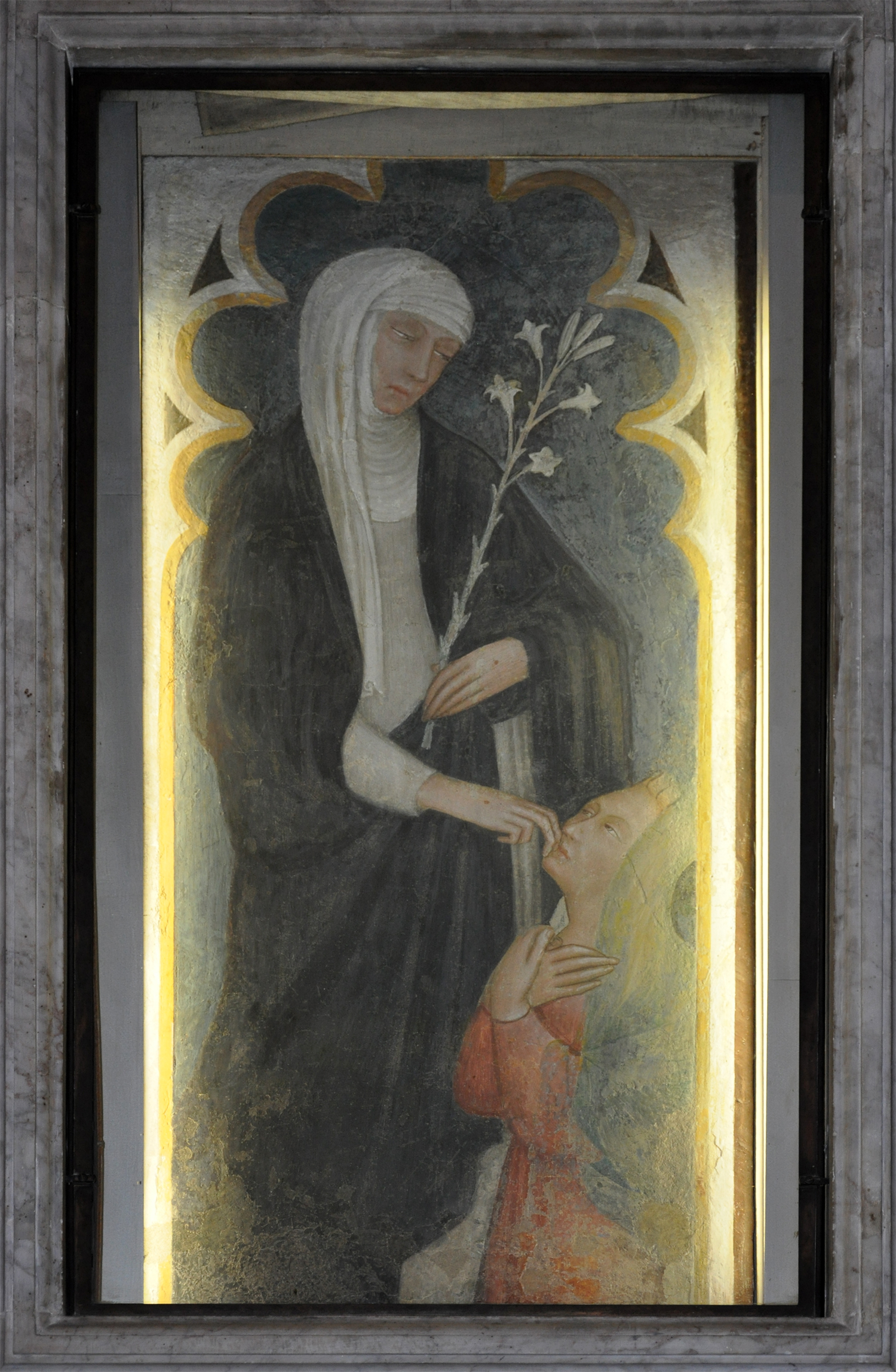 b) as depicted (at left; at right, St. Cecilia) by Beato Angelico in an earlier fifteenth-century panel painting (between 1420 and 1429) in The Courtauld Gallery, London:
http://static.artuk.org/w944h944/NGS/NGS_NGS_NG_1030.jpg

c) as depicted (with a donor before the BVM and Christ Child) in an earlier fifteenth-century panel painting from Lombardy (c. 1440) in the Metropolitan Museum of Art, New York: 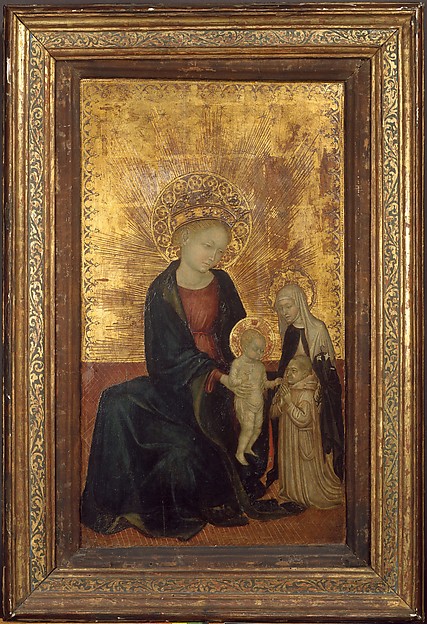 e) as depicted by the Sienese artist Sano di Pietro in a mid-fifteenth-century panel painting (c. 1442) in the Bonnefanten Museum, Maastricht:

f) as depicted in a later fifteenth-century fresco in the (ex-) chiesa di San Pietro in Carpignano Sesia
(NO) in Piedmont: 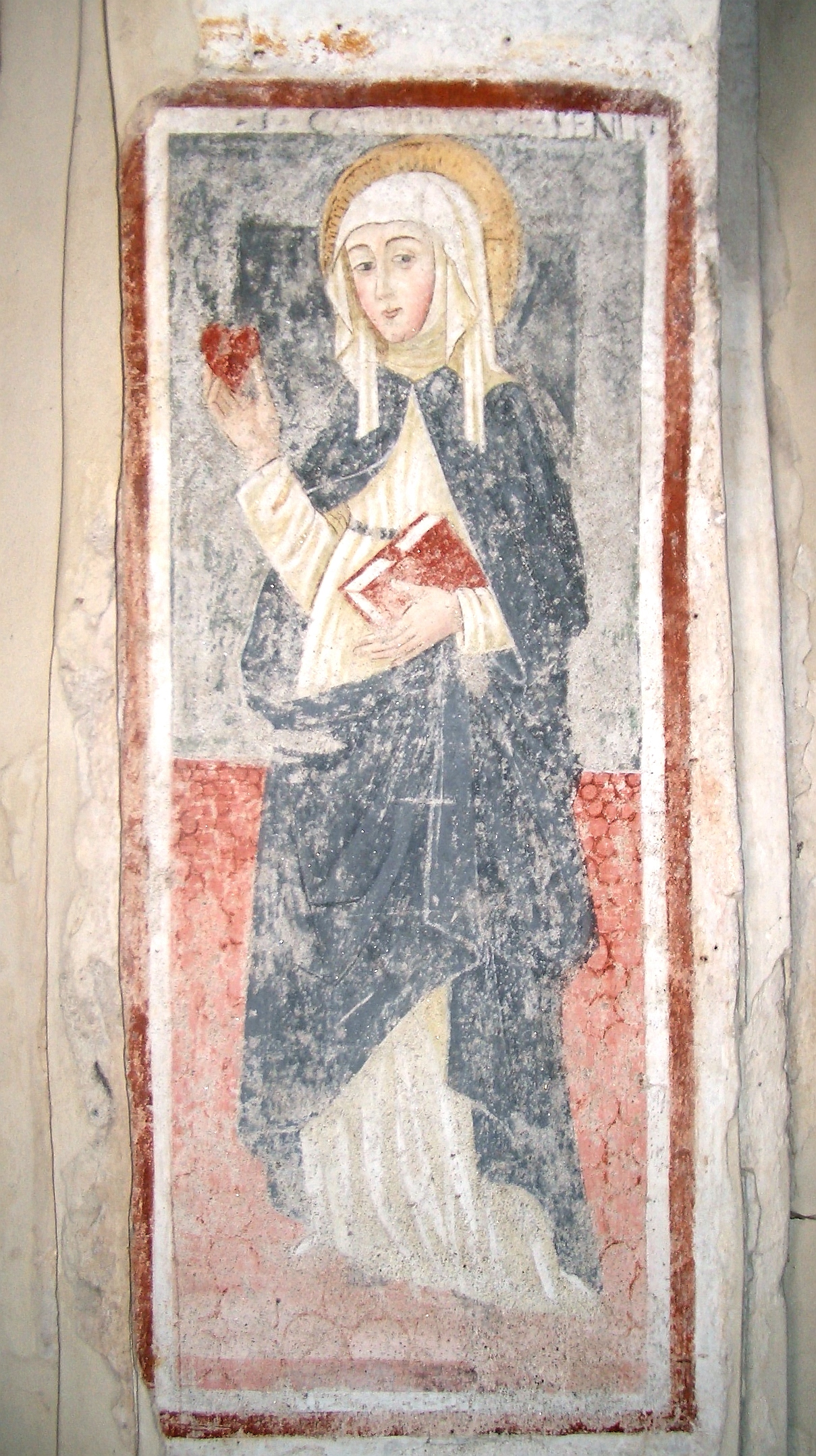 g) as depicted (receiving the stigmata) in a later fifteenth-century copy of her Vita by Bl. Raymond of Capua (Carpentras, Bibliothèque municipale Inguimbertine, ms. 472, fol. 2v): i) as depicted (scenes from her Vita) by the Sienese artist Giovanni di Paolo in a series of later fifteenth-century predella paintings (c. 1462-1470) now in several different museums:

a) receiving the Dominican habit (Cleveland, Cleveland Museum of Art): 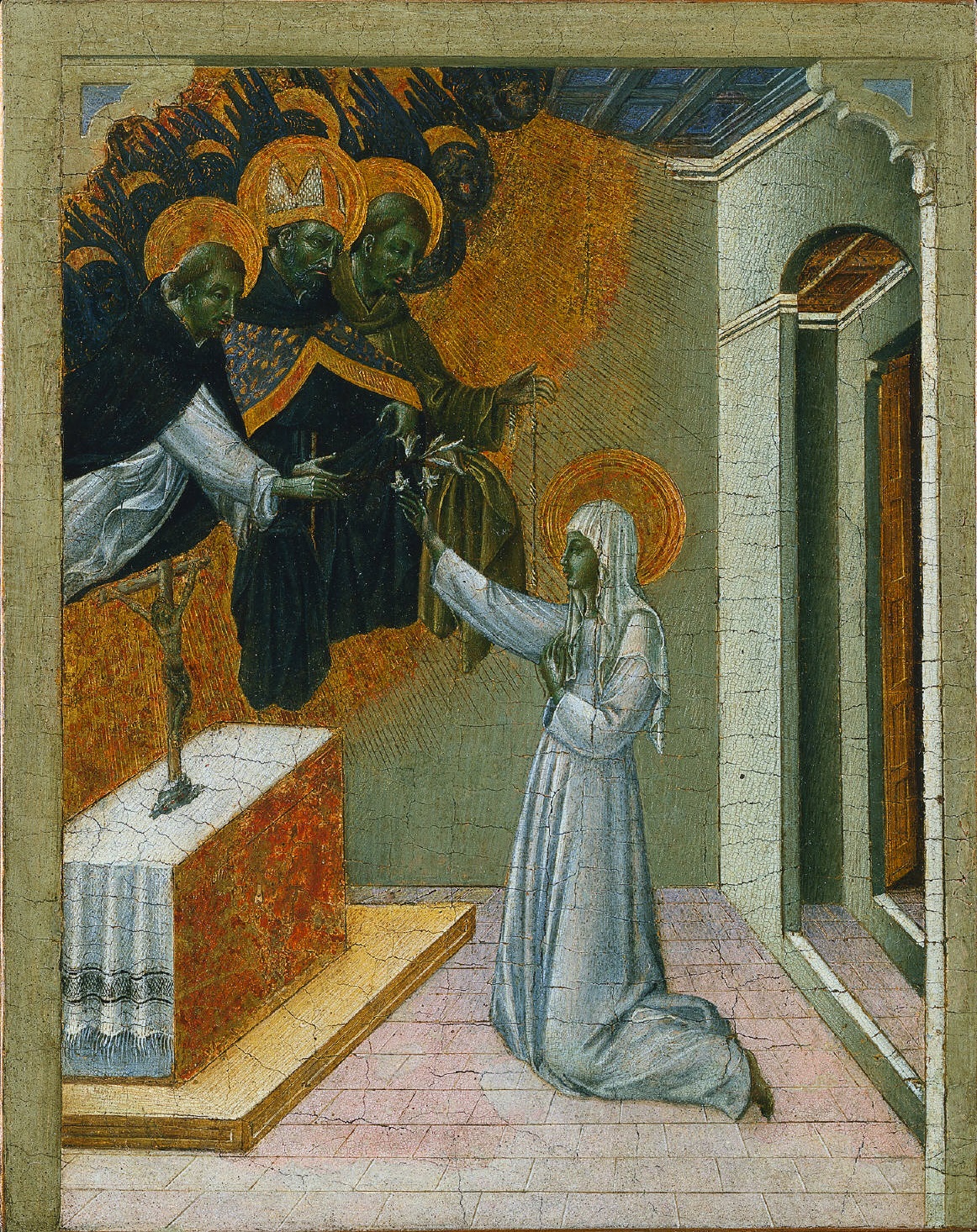 b) clothing Christ disguised as a beggar (Cleveland, Cleveland Museum of Art): 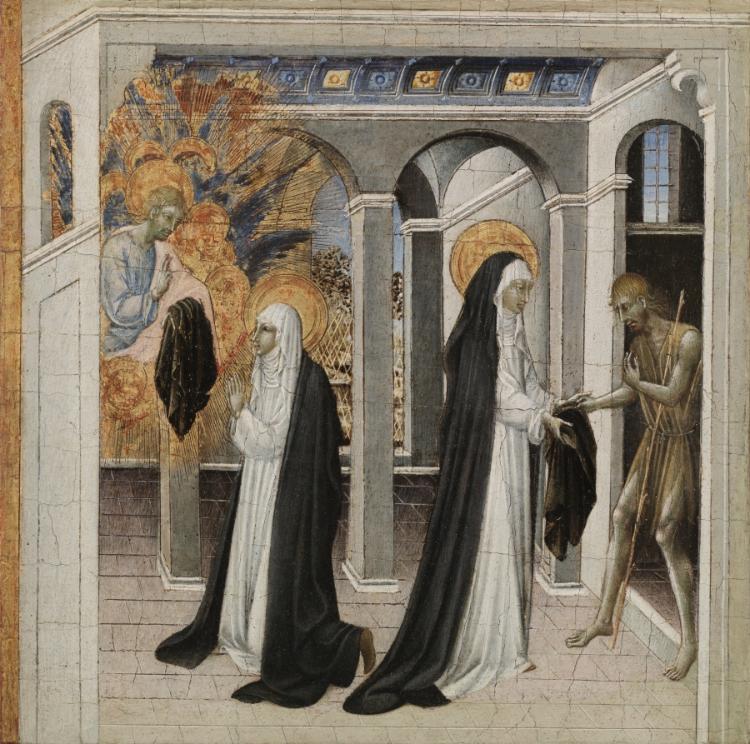 c) exchanging her heart with that of Jesus (New York, Metropolitan Museum of Art): 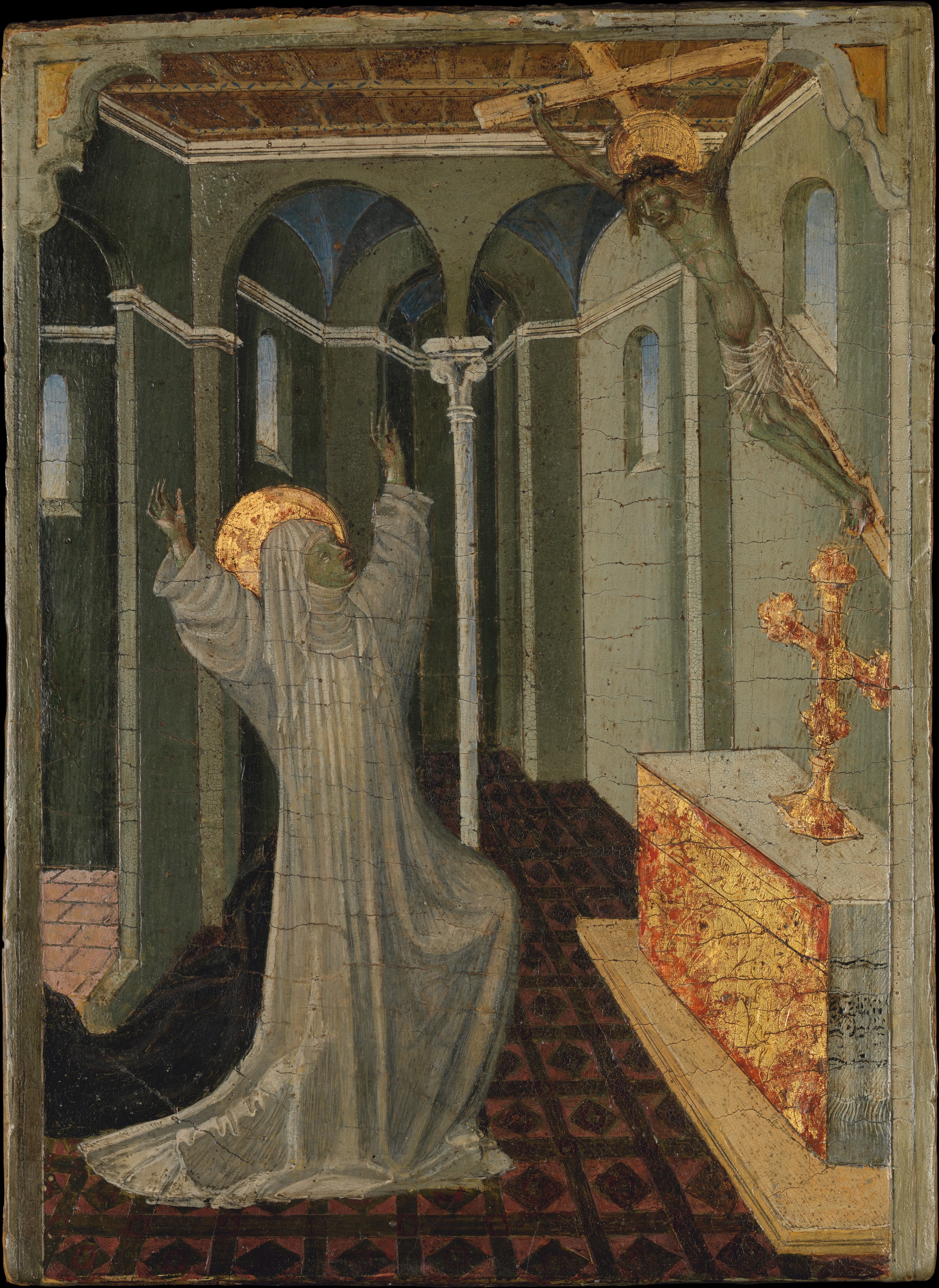 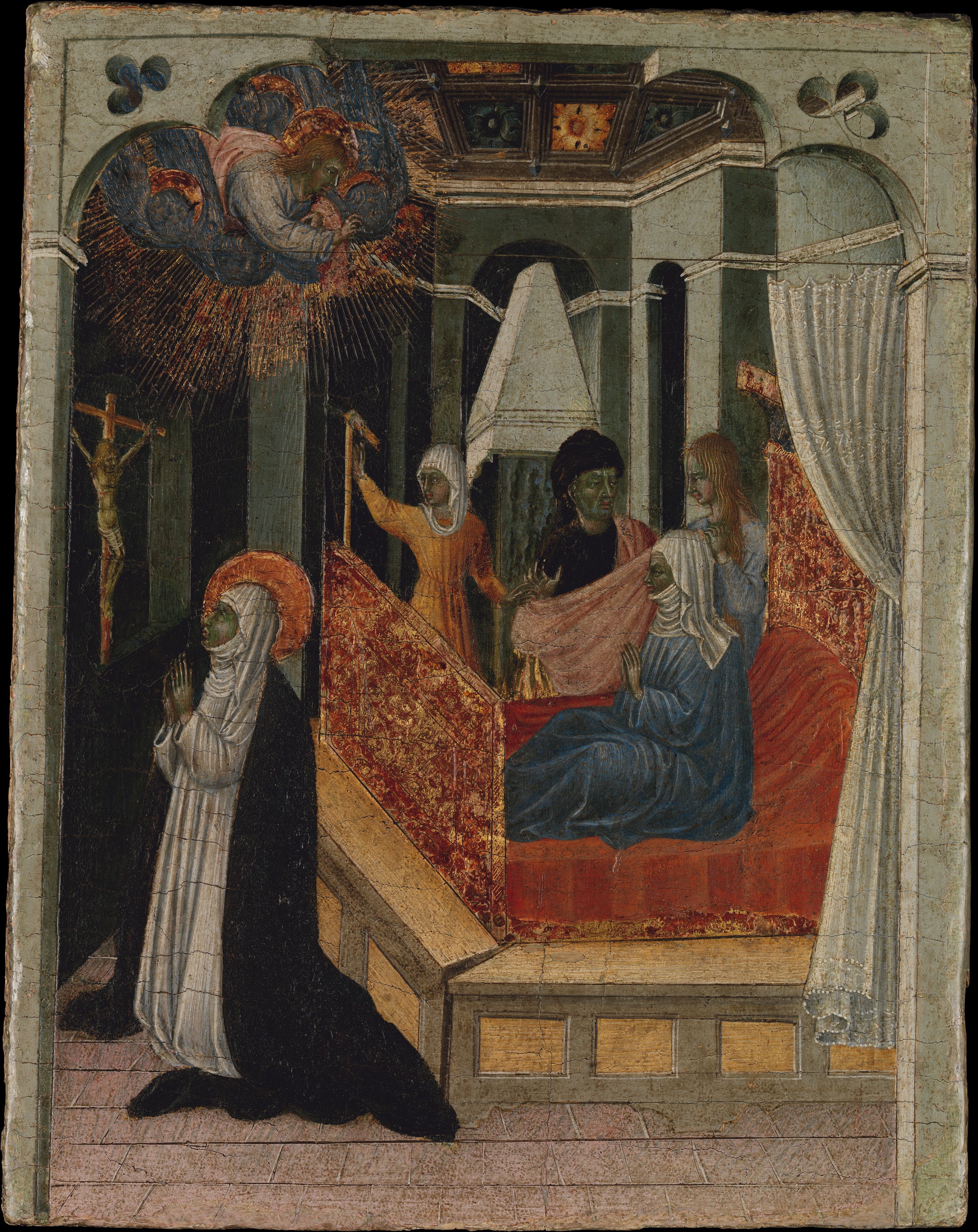 http://images.metmuseum.org/CRDImages/rl/original/DP366038.jpg
h) before the Pope in Avignon (Madrid, Museo Thyssen-Bornemisza):

j) as depicted in a panel of a later fifteenth-century glass window (Bay 23; c. 1470) in the église Notre-Dame in Carentan (Manche):

k) as depicted (at far right) in a late fifteenth-century predella panel painting of Dominican saints in the Musée Unterlinden in Colmar:

m) as depicted (at left, flanking the BVM and Christ Child; at right, St. Sebastian) by the Sienese artist Matteo di Giovanni in a late fifteenth-century panel painting (c. 1480-1490) in the Columbia Museum of Art, Columbia, SC:

n) as depicted (at right; at left, St. Catherine of Alexandria; their mystical marriages) by Ambrogio Bergognone in a late fifteenth-century panel painting (c. 1490) in the National Gallery, London:

o) as depicted by Carlo Crivelli in a late fifteenth-century panel painting (c. 1490) in the Musée du Petit Palais, Avignon:

q) as depicted by Domenico Ghirlandaio and workshop in a late fifteenth-century panel painting (between 1490 and 1498; from his dismembered Tornabuoni altarpiece for Florence's basilica di Santa Maria Novella) in the Alte Pinakothek in Munich:

r) as portrayed by the Sienese painter and sculptor Neroccio di Bartolomeo de' Landi in a late fifteenth-century polychromed wooden statue (1494) in the oratorio di Santa Caterina in Siena:

s) as depicted (as spiritual guide of the second and third orders of Dominicans) by Cosimo Rosselli in a late fifteenth-century panel painting (c. 1499-1500) in the National Galleries of Scotland:

t) as depicted (surrounded by demons) in a  late fifteenth- or early sixteenth-century panel painting (c. 1500) in the National Museum in Warsaw: 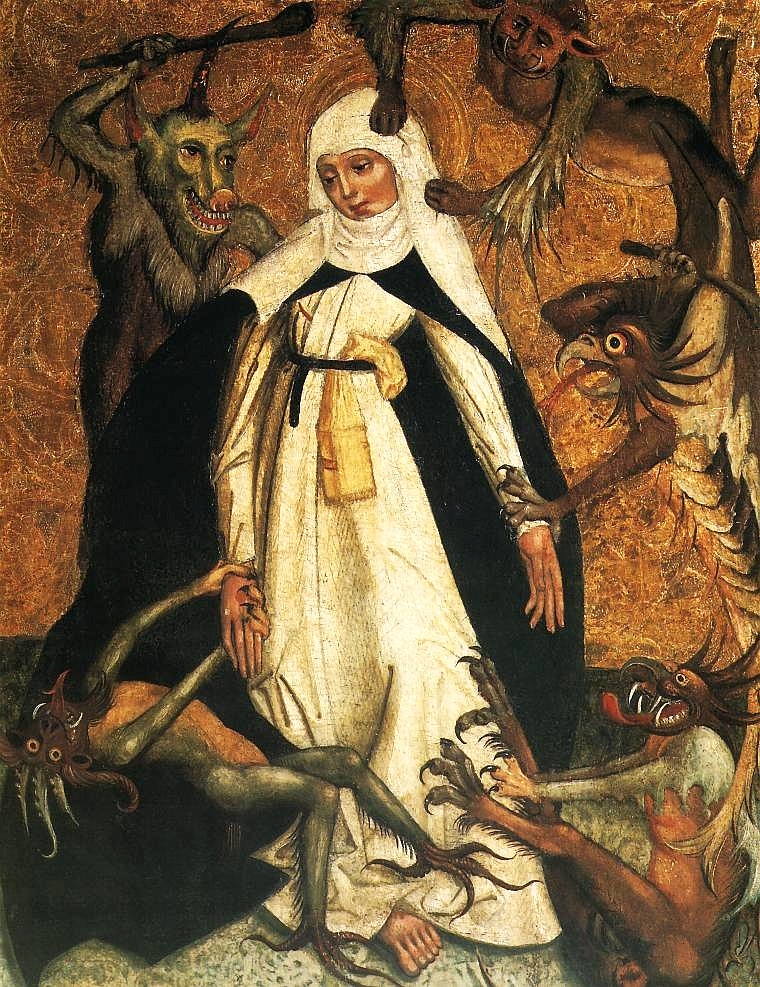 v) as depicted (upper register; her canonization by Pope Pius II) by Pinturicchio in an early sixteenth-century fresco (between 1502 and 1507) in the Piccolomini Library in the cathedral of Siena: 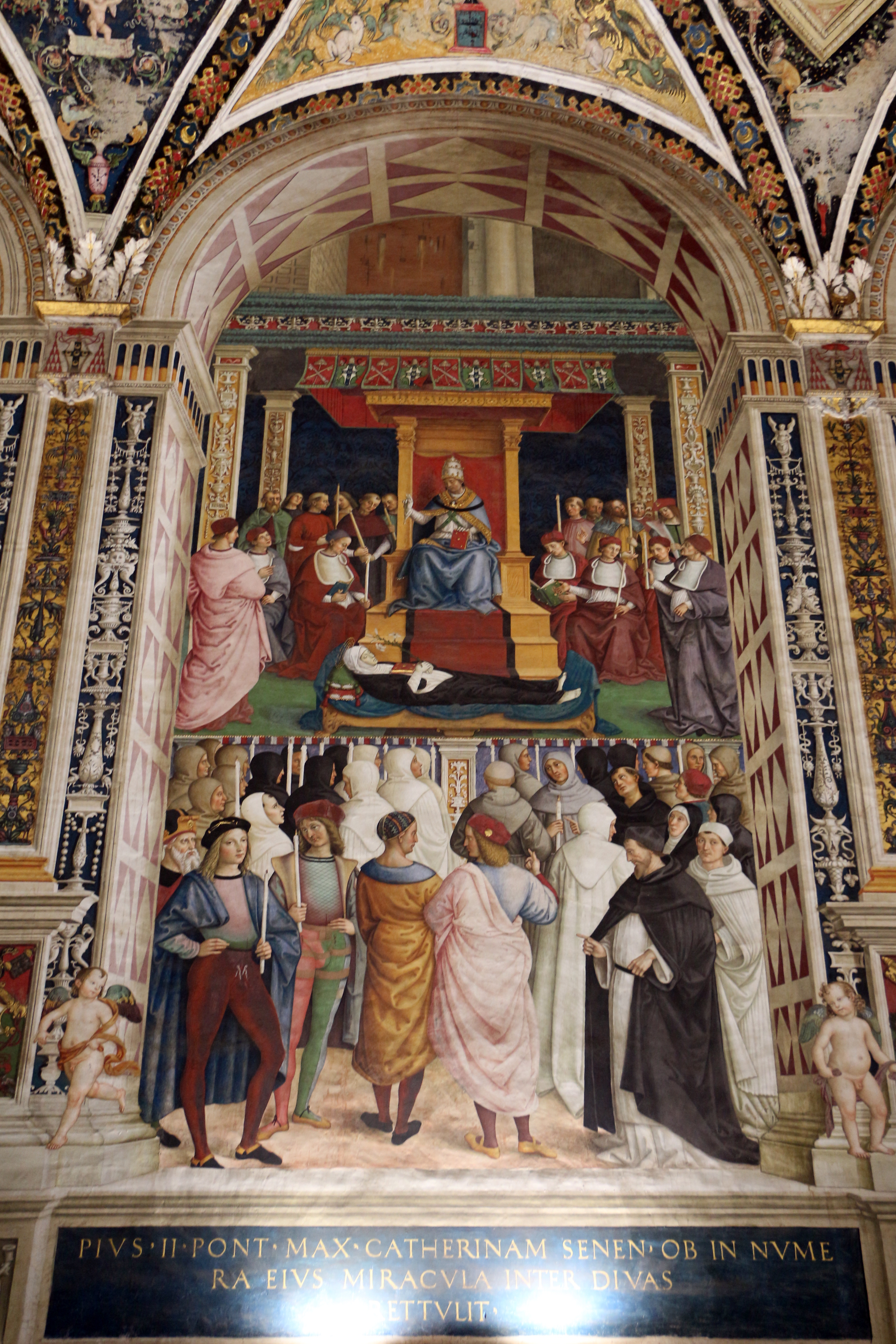 x) as depicted (upper register at center, between. SS. Peter Martyr and Margaret of Hungary) by Juan de Borgoña in an early sixteenth-century panel painting (c. 1515) in the Museo del Prado in Madrid:


Here in Oxford the Oratory possesses in its relic collection a letter written by St Catherine, and which is on displayto mark her feast. I understand that the editors of a new definitive edition of her letters are due to visit the Oratory in the near future to copy it for inclusion in their project.