Last Saturday I had a day out visiting friends in Buckinghamshire. It was a splendid spring day on which to travel out on the bus from Oxford, with the trees and hedgerows displaying an increasing and varied range of greenery in the bright sunshine.

The route took me through Thame, an historic town and with a handsome medieval parish church and a striking collection of old buildings. I keep promising myself whenever I am passing through the town to have aday exploering it.

I had arranged to meet my friend in Stone, which lies just west of Aylesbury. He was armed with Pevsner's Buckinghamshire and we went to have a look in the village church of St John the Baptist, where several parishioners were doing cleaning and gardening tasks. The church is medieval, though obviously restored in the nineteenth century, but with an attractive twelfth century north nave arcade.

The great feature is the twelfth century font, originally at the church of St Mary the Virgin Hampstead Norreys near Newbury in Berkshire, from whence it was thrown out in 1767. Having been spotted by an FSA it was moved in about 1845 to Stone and restored. 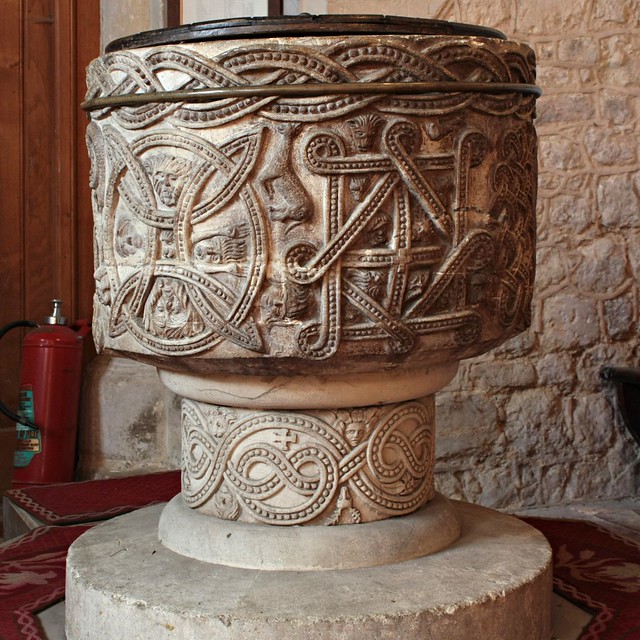 The font in Stone Church
The stem is nineteenth century

There is a technical description of it, and the other carvings of the same era in the church, at St John the Baptist, Stone, Buckinghamshire · The Corpus of Romanesque Sculpture in Britain and Ireland


The real questiuon that arises is that of how to interpret the sculpture. This is set out  at the following site, with links to both of the alternatives set out by scholars, at Buckinghamshire Archaeological Society - Font at Stone 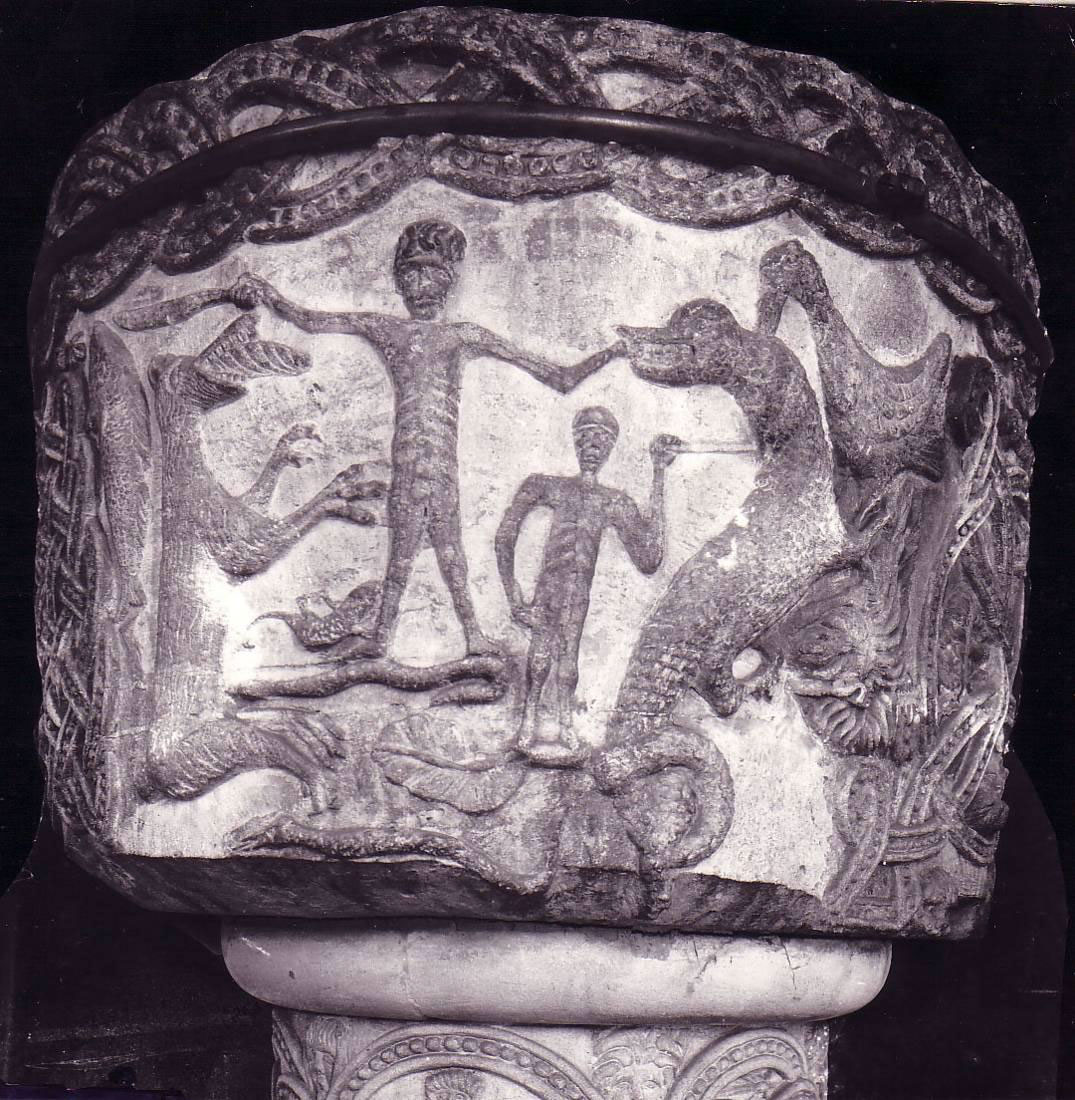 The panel with figures - Heracles or Christ?

Ellen Ettinger's article from 1964, arguing that the image originates with the story of Heracles, can also be read at THE FONT AT STONE* - Buckinghamshire Archaeological Society

However the information on display in the church follows the interpretation of the late Mary Curtis Webb in her study Ideas and Images in 12th century sculpture, and which is linked to from the first site.

I am much more inclined to accept her interpretation, which can be summarised as follows. She dates the font to 1140-50 and produced under the influence of Reading Abbey, founded by King Henry I  with Hugh of Boves as its first Abbot from 1123. A Cluniac monk he had studied under Anselm of Laon - for whom see Sir Richard Southern's first volume on Medieval Humanism and Christian culture - and was especially indebted to the ideas of High of St Victor of whose De Sacramentis Christianae Fidei there were three copies at Reading and one at its daughter house at Leominster. This states that "There are two works under which all things may be subsumed: these are the Work of Foundation (or Creation) and the Work of Restoration ( or Salvation)."

The interlace patterns represent the Cosmic harmony of macrocosm and microcosm, and ideas deriving from Boethius' translation of the Introduction to Arithmetic of Nicomachus of Gerasa and Plato's Timaeus

The panel with figures derives from St Gregory's Moralia in Job  and the apocryphal Gospel of Nicodemus. This is the ransom theory of Salvation whereby God deceived Satan with the bait of mortal flesh, whereby the Evil One was caught on the " Hook of Divinity." Each detail on the font is to be found in early versions of the Gospel of Nicodemus.

The naked figure of Christ descends alone to Hades, where He encounters two aspects of Hell - Death as a Wolf and Satan as a Dragon. Christ offers His left hand as bait to the jaws of the dragon whilst He points with his knife at Leviathan rising for the triple bait. Leviathan is fated to have his flesh sold  as meat in the streets of Jerusalem at the coming of the Messiah.

A salamander representing the powere of Christ to withstand teh fires of temptation nestles against teh leg of the Redeemerv who tramples the serpent (the Tempter) underfoot. Meanwhile the "Dear Bird from Heaven" - from the Anglo-Saxon poem of Cynewulf  - pecks at the monster.

Adam, wearing the "Helmet of Salvation" stands on aleaf between God Incarnate and the Devil - a frerence to St Gregory's comment in the Moralia "What is man but a leaf who fell from Paradise from the Tree (of Life)"


The large bread roll being regurgitated by the Wolf, the jaws of Death, is a reference to afourth century  hymn of St Ephraim " To others he multiplied bread but my bread from my mouth  he steals it " There was avolume of St Ephraim's writings in the Reading Abbey library.

In the second half of the twelfth century the Cur Deus Homo of St Anselm (d. 1109) and the rising interest in Aristotle displaced the thought of Plato and Number theory, and theology moved in new fditrections, other than those of the makers of this font.


On this approach the font does indicate the complex level of theology that was being made available to rural parishes in the mid-twelfth century through the patronage and influence of monastic houses. I presume that it was painted originally, which would have enabled teh ideass to be brought out more distictly.

Being abear of small brain I am having difficulty transferring the photographs I took with my mobile phone to the blog - if I can do so I will post again about this remarkable font.


From Stone we went through Wendover and Hale, the birthplace of John Colet, to my friend's house for lunch with him and his wife and children - which was very agreeable indeed.

On the way back to drop me off for the Oxford bus we stopped to look at the church of St Mary in Haddenham. This has an impressive thirteenth century tower and work of several succeeding centuries. This may in part reflect the fact that the manor belonged to the cathedral priory at Rochester in the middle ages.

The church is adjacent to - indeed rises above - a duck pond which is, as I understood it, home to a flock of true Aylesbury ducks.


There are also some fine examples of both timberframing and of the local building material wychert, a type of cob construction. It is one of only three wychert (or whitchet) villages. Wychert describes a method of construction using a white clay mixed with straw to make walls and buildings, which are then thatched or topped with red clay tiles. 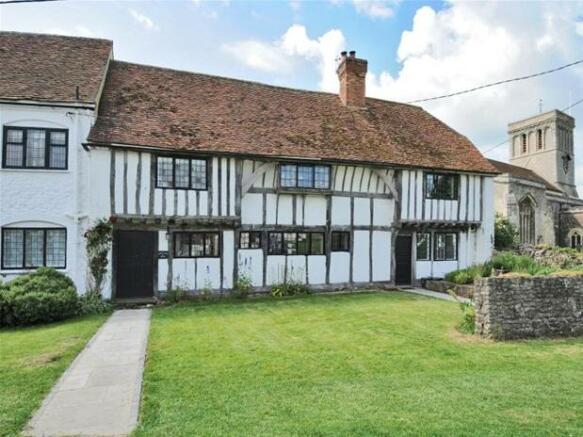 A fifteenth century house next to the church

This was a most enjoyable day out, seeing friends I value and places of historic interest in pleasant countryside illuminated by the spring sunshine.