There has been quite a lot on the Medieval Religion discussion group today about the rediscovery of a significant series of wall paintings in the church of St Cadoc in Llancarfan in the Vale of Glamorgan in Wales. Dated by those working on the project to the 1480s these very impressive paintings which feature a very striking figure of St George slaying the dragon, as well as depictions of the Seven Deadly Sins can be seen in this BBC news story, with its accompanying video, here. 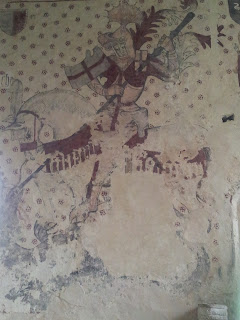 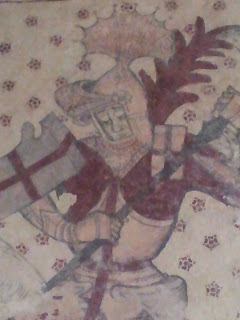 St George and the Dragon from Llancarfan

There is another illustrated recent BBC News post about the figures of the Seven Deadly Sins here. 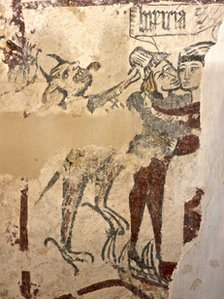 The Devil promotes Lust in one of the uncovered paintings


I understand from a post by Dr Madeleine Gray who has worked as a historian alongside this important conservation scheme that the church has nave and a substantial south aisle with south chapel at the east end. The St George painting occupies most of the south wall, the Deadly Sins go round the west end of the south wall and onto the west wall. There is clearly undamaged paintwork remaining under the limewash on the west wall of the aisle north of the window and round to the north wall of the aisle. At present the view is that these paintings depict the Acts of Mercy. There are traces of paint elsewhere in the church, including over the chancel arch, but the conservator says the smooth plaster elsewhere in the building suggests it has been renewed in the post-medieval period and therefore will not have any surviving decoration. In addition there are also some post-medieval texts ( part of one which has been left covers the castle and princess in the St George painting) which may make it difficult to justify exploring further. However I would imagine it would not be impossible to remove those later layers to presreve them and to reveal the medieval worlk underneath.

In a related story, the fine work of the fifteenth century polychromed altar reredos screen in the church has been restored, and there is an illustrated article about that here. I was somewhat surprised and disappointed to see yet again the idea that such ascreen must have been brought fromelsewhere after the reformation - why do so many people still fail to realise how splendidly even small communities decorated their parish churches in the middle ages? There is a piece by the conservators with illustrations  at St Cadoc’s Church, Llancarfan, Glamorgan: Survey of Reredos


St Cadoc's definitely looks to be a church very well worth visiting - another one to go on the list of visits to make.