Today is the 1325th anniversary of the death of St Cuthbert in 687, and his traditional feast day. The modern calendar commemeorates him on September 4th, the date of the translation of his relics in 1104, but this, his dies natalis seems much the more appropriate day.

St Cuthbert was Bishop of Lindisfarne and died at his hermitage on Inner Farne. My reflections from 2010 on a visit there in 1989 can be read in my post Lindisfarne. To those I would add a note to draw attention to the inherent symbolism in Cuthbert, the Northumbrian hermit monk, whose consecration at York in 685 by the very cosmopolitan St Theodore of Tarsus, Archbishop of Canterbury, "the last known student of the school of Athens" linked the eastern and north-western limits of Christendom and virtually the whole breadth of the known Christian world.

The biography in the Oxford DNB by David Rollason and R. B. Dobson can be read here, and there is another online account here.

These both discuss the relics of St Cuthbert which survive from his time, or which were given to his body and shrine in the later Anglo-Saxon period. They are described and discussed here, and there is a separate, and longer, article on the St Cuthbert Gospels here. These were plavced in his coffin in the late seventh century and from their size it seems reasonable to believe that they were his own property and used by him on his travels and in his hermitage. They were removed from the tomb at the reformation and eventually came into the possession of Stonyhurst. There is currently an appeal by the British Museum to raise the money to buy this very important manuscript and display it in London and Durham on a six monthly basis.

Probably the best known of the artifacts found in his grave was his pectoral cross, and its design has been re-used in many representations in Durham and Northumberland. 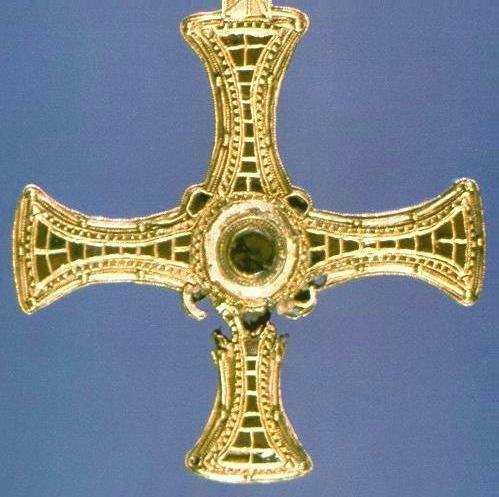 Devotion to St Cuthbert was widespread, and in the north often reflects the reputed wanderings of the monks with the relics of St Cuthbert, St Oswald and others, and also the later prestige of the see of Durham and its widespread estates. However the cult also trvalled southwards and he was popular in tenth century Wessex, and commemorated by churches such as St Cuthbert in Wells and by the devotion of the West Saxon dynasty to him. As they established their authority in the north after 924 paying respect to St Cuthbert was not only a matter of devotion but also a matter of political tact and the recognition of local custom and practice.

Since 1104 St Cuthbert has rested within the walls of Durham cathedral, and his burial place is still a place of pilgrimage. With him in the coffin is, or was, the head of St Oswald, the King of Northumbria killed in battle in 641. As a consequence this came to be one of St Cuthbert's attributes and so he is normally depicted as a vested bishop holding a King's head. Early in the fifteenth century Thomas Langley, Bishop of Durham from 1406 -1437, gave the glass of the great window of the south choir transept in York Minster, filling it with the story of St Cuthbert, and balanced by that on the north containing the life of St William of York. There is also this link from Gordon Plumb to a comprehensive set of images of the Cuthbert window here; each one is expandable. Not only do the scenes recount the story of St Cuthbert but are a splendid set of portraits of leading figures at the time and depictions of early fifeenth century life. I know from the experience of trying to look at the panels when in the Minster that this is a much easier way of looking at this marvellous window.
May St Cuthbert continue to pray for the Church and Realm